Rei is a posthumous supporting character in unORDINARY and the main protagonist of Side Story - Rei. Prior to his untimely death, he was a graduate of Wellston Private High School and the former King of Wellston before Arlo.[1] As a vigilante, he went by the moniker X-Static.[2]

Rei appeared to be a muscular late teen with emerald hair and golden eyes. He was seen wearing a Wellston school uniform with and without the vest when he was alive.

X-Static's corpse, after being murdered by EMBER 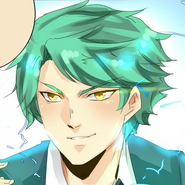 Rei in the Wellston uniform

Rei giving a piggyback ride to his younger sister Remi

Rei with his sister, Remi, and his successor, Arlo 3-4 years before the main plot. 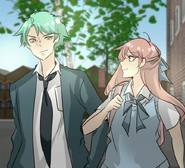 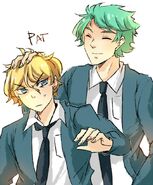 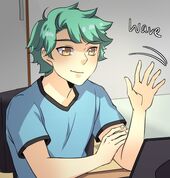 9th Grade Rei
Add a photo to this gallery

Unlike many high-tiers of his time, Rei was one of the few people in unORDINARY to hold all tiers in equal regard. Even before being influenced by W. H. Doe's book, Rei dedicated his life to make the world fair for everyone around him. Encouraging and amicable, Rei was known for giving the lower tiers hope that they can compete in life. After reading Unordinary, his altruistic nature intensified, leading him to become the vigilante X-Static.

Power and ability training had their place in Rei's worldview. He believed that one should be at their strongest so they would always be prepared for what life throws at them. To that end, he personally oversaw his sister's ability training and advised Arlo to defend the title of King against all newcomers. His philosophies on strength and kindness were intertwined, as he used his strength to the fullest extent in the name of helping those in need during his time as a vigilante.

Rei grew up in a family of Elite-Tiers who didn't discriminate based on hierarchy. His ideology and worldviews were most likely shaped by his immediate family.

During his first year at Wellston Private High School, Rei was a mid-tier student with a level of 3.2 and resided in the dorms with his roommate Kuyo. Despite being a mid-tier at the time, Rei was still one of the stronger freshmen in Wellston, and both he and Kuyo were acknowledged by the royals of the time.[3]

Unfortunately, after Kuyo began hanging out with the Royals, Rei would see his friend become more of a bully, and the relationship between Rei and Kuyo would sour over time. While initially unsure about what to think, after some advice form his mother, Rei had made up his mind. No longer able to stand by Kuyo's side, Rei had chosen to do things his way and would eventually become the King of Wellston.[4]

Rei was the King of Wellston until he graduated four years before the events of unORDINARY. Before graduating Wellston Private High School, Rei was known for his unorthodox treatment of all tiers. During his rule, Rei, in hopes to get rid of violence and treat all students equally, told the higher tiers to be lenient with the lower tiers and encouraged the lower tiers to "reach for the skies."[5] Many of the higher tiers disliked how Rei ran the school, including Cecile and his former Jack, Arlo.

Arlo had battled Rei numerous times, and at some point, Rei promised to have a rematch against Arlo.[6] After his graduation, Rei congratulated his successor, Arlo, for being the youngest person to hold the title of King of Wellston, but also warned his successor about the many students who were gunning for his position. Arlo vowed to keep the King position as long as he was in Wellston.[7]

Unfortunately, despite Rei's good intentions, his methods of running the school proved to be detrimental towards the Wellston student body in the long run, and many students simply waited for his departure. Once Rei had left, Lower-tiers who were inspired by him began to pick fights with the higher-tiers, and every day, fights would break out in the school without any regards toward anything. Arlo spent his second year undoing what Rei had done and reestablished the hierarchy in Wellston. Despite this, Arlo does not hold any ill-will against his predecessor whatsoever and continues to harbor respect for Rei.[5]

At some point in his life, Rei was influenced by W. H. Doe's Unordinary[8] and became a well-known vigilante, X-Static.[9]

Unfortunately, X-Static would meet his end at the hands of the anti-vigilante, EMBER. His body was found at Lovun, in an alleyway near the intersection of Rokel and Acres Street. According to the news, X-Static's body had numerous second-degree burns, stab wounds, and the EMBER logo branded on his abdominals.[9]

Lightning: As a high-tier and a former King of Wellston, Rei was considered to be one of the strongest students of his time. Just like his younger sister, Remi, Rei's Lightning, to generate electricity.[1] It is highly likely that he also possessed the ability to detect electrical circuitry and run at high speeds with his ability active. Rei was also powerful enough to pierce Arlo's Barrier and won every match he had against Arlo. Arlo has even gone as far as to state, "You couldn't kill [Rei] even if he let you."[6]

During his first year, Rei started off as a mid-tier with a level of 3.2.

Remi was Rei's younger sister and while the two were never seen interacting in the webtoon itself, it is heavily implied that Remi that the two shared a close, familial relationship. Furthermore, Remi appears to share Rei's morals and standards, as shown during her time as X-Rei. After Rei had passed, Remi mourned her brother and become noticeably more quiet and passive.[2] Once she realized that EMBER was behind her brother's murder, Remi hopes to bring EMBER to justice.

While Arlo disagreed with Rei's methods of running the school, Arlo nonetheless admired his predecessor[10] and holds nothing against Rei for ruining the hierarchy.[5] According to Remi, Rei always asked her about Arlo's well-being and often talked about how he was for great things. Furthermore, Arlo does not tolerate anyone bad-mouthing Rei as shown with his reaction when talking with Cecile.[11]

Retrieved from "https://unordinary.fandom.com/wiki/Rei?oldid=27014"
Community content is available under CC-BY-SA unless otherwise noted.