This is a list of minor characters in unORDINARY. Characters on this page have had at least one speech bubble of dialogue, or at least had very limited appearances. Every character in this page has little impact to the overall plot.

The trigonometry teacher has neck-length brown hair, orange eyes, and wears rectangular spectacles. The teacher is known for intimidation and gave a death glare to John when he wanted to go to the bathroom in the middle of class. They also threw a piece of chalk at Mardin hard enough to give him a bleeding nose. 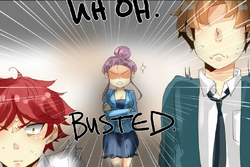 The Wellston Librarian is a formidable lady who wears her hair in a magenta bun. She wears a blue blouse and skirt. It seems that she is used to Blyke and Isen and has thrown them out of the library for being too noisy before. [2]

The English Literature Teacher is a teacher who appeared in the Project Partners arc. She assigned literary analysis presentations to various students.[3]

Brea is a mid-tier student of Wellston. She has green eyes and sweet-orange hair in twin ponytails. In her debut, Brea was seen alongside Misa, badmouthing Seraphina and bullying John. Once Seraphina smashed Misa's face against a wall, Brea ran away in fear. In her latest appearance, Brea is seen bullying Evie in a hallway when Seraphina stopped her.[4] After she was stopped by the Ace, the humiliated Brea attempted to attack Seraphina, but was intervened by Arlo. [5] She is a mid-tier with the ability Arcane Shot.

Skrev is a mid-tier student of Wellston Private High School and is a male student with sky-blue hair and yellow eyes. He, along with Crail were seen chasing John and the powerless Seraphina in hopes to overthrow the former Ace. He and Crail were both stopped by Blyke before any damage could be done. He is a mid-tier with the ability Strong Kick.[6]

Heinz is a mid-tier student of Wellston Private High School and is a male student with red hair and red eyes. He was first seen in Chapter 112, using his ability to rush into the cafeteria and cutting in line. His actions led him to fight against Yuline shortly afterwards. His ability is Catch Up, and both his name and ability are a pun to Heinz Ketchup.

Yuline is a mid-tier student of Wellston Private High School and is a female student with blue hair and lime-green eyes. She was first seen in Chapter 112, furious with Heinz cutting in line and mostly likely battled him. Her ability is Clobber and likely grants her the capability to beat others up with great strength. Her name is a pun based on 'You line' as shown when she clobbers Heinz for cutting queue.

The Gossip Trio, first appearing in Chapter 139, consists of a tall boy with sandy-blonde spikey hair, a shorter boy with blue hair, and a girl with green hair and pigtails. Ever since an anonymous student donned a mask and began taking down the school's top ranked students, they began to discuss the startling developments with each other. The boys witnessed Blyke's ill-fated fight with said powerhouse, and relayed the events to their female friend. They were worried that this student, dubbed Joker by other students, may be someone they offended in the past, suggesting they weren't considerate towards others. The girl was worried, and asked if they were sure it wasn't just Arlo under the mask. She was reminded that the ability Joker used in the fight wasn't Barrier. The trio noticed Arlo himself was listening in on their conversation, and the blue-haired boy apologized for the girl's stupid question.

Joker eventually crushed all the Royals single-handedly, and news of other students impersonating him soon spread. The Gossip Trio met once again to discuss this frightening turn of events. None of them wanted to fight any of the Jokers, for fear of being up against the real one. They talked of how it had become too frightening to even roam the school halls alone, and agreed to move around together. Remi overheard their discussion and approached them. She asked if they had any ideas on how the top-ranked students could improve the situation, to their astonishment.

Clio is a mid-tier student of Wellston Private High School and is a female student with sky-blue hair and red eyes. She was first seen in Chapter 140, beating up Roland until Evie tackled her. After defeating Evie, she moved on to Seraphina before being defeated by the combined efforts of Evie and Seraphina. Her ability, Dizzy Punch allows her to inflict others with dizziness by punching them.

Kiara is a mid-tier student of Wellston Private High School and is a female student with dark teal hair and amber eyes. In Chapter 160, Kiara appears as one of the false Jokers roaming around the school and actively targeted Seraphina. She would be defeated and unmasked in Chapter 162. Her ability, Barrage allows her to pressure opponents with a flurry of punches.

Levani is a minor character who was seen shopping at the Kovoro Mall. After having her ability gauged by the Ability Gauge Vendor, she was furious to hear that her level was lower than what she had thought. Out of anger, Levani demanded a refund from the vendor, but John intervened, making Levani even more furious. Though she attempted to use her Grenadier ability on John, Payton stopped her and forced the vendor to give her money back.[7] Levani is an elite-tier with the abilty Grenadier, which allows her to condense destructive balls of energy and throw them at foes.

Payton is a security guard at the Kovoro Mall with light-citron hair with his sides and celeste eyes. In his first appearance in Chapter 9, Payton was seen stopping Levani from using her Grenadier ability on the Ability Gauge Vendor but forced the vendor to give Levani her refund.[7] In his latest appearance in Chapter 49, Payton and fellow security guard Merin mistook Blyke, Isen, and Remi for setting off a smoke bomb and had the trio arrested; however, he released them once he realzed that the three arrestees were students of Wellston.[8] Payton is an elite-tier with the ability Superhuman.

Merin is a security guard at the Kovoro Mall with blue hair and forest-green eyes. In her first appearance in Chapter 49, Merin was one of the backup guards tasked to apprehend Remi, Isen, and Blyke. She was able to catch up to Remi and tackled her, but got herself electrocuted and was seemingly knocked unconscious as a result. However, Merin recovered quickly and was able to arrest Remi. She also received a "Employee of the Month" award for "going above and beyond the call of duty, and tackling a lightning bolt."[8] Her ability, Charge, increases her ability to tackle foes.

Two green-haired people who were lining up to have their abilities gauged at Kovoro Mall by the Ability Gauge Vendor. They left after Levani started causing a commotion.[7]

The Invisible Assailant was someone (or something) who followed John and Seraphina to the bus stop opposite the park outside Kovoro Mall after their shopping trip. John somehow discovered them and Seraphina used her ability to deliver a roundhouse kick to them.[9]

It is unknown if they are affiliated with Terrence, as they share the same ability.

When Remi, Isen, and Blyke discovered the transmitter chip in the Ability Gauge Vendor's "prize" and confronted him about it, the Invisible Assailant dropped a smoke bomb and helped him escape. When they tried to drive away on a motorcycle, Remi electrocuted them with her Lightning. Unfortunately, she was distracted by Merin and the duo managed to escape anyway.[8] 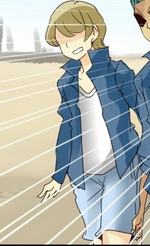 The Agwin Healer is the Healer for Agwin High School and is seen wearing a blue jacket, white shirt, and light blue shorts. The Healer has fair skin and brown hair and is an excellent healer as shown when they healed Gou with great competency.

Melody, also known as Mels, is a mid-tier student of Agwin High School with hot-pink hair and dull-blue eyes. In her first and only appearance, she overheard Remi talking to Arlo about vigilantes. Thanks to her hatred of superheroes, she poured her beverage on Remi's head, but regretted it after realizing that she had come face-to-face with Wellston's King and Queen. Her ability is Impact.[10]

Radiance was a vigilante killed by EMBER, presumably in the months before the beginning of unOrdinary. Their ability, level, appearance, and gender are unknown. Their ability may have something to do with light or radiation.

Equinox was a vigilante killed by EMBER, presumably in the months before the beginning of unOrdinary. Their ability, level, appearance, and gender are unknown. Their ability might be related to astronomy, the sun or time.

ARKRayGeous was a popular and powerful high-tier vigilante who was recently killed by EMBER in South Wellston. [11] His exact level and ability is unknown. His ability could possibly have something to do with rays.

Shatterstack was a well-known superhero who was found dead in Wellston by the police after being killed by EMBER.[12] His level and ability are unknown. Headmaster Vaughn and Keene discussed his murder when they saw it on the news.

Genie is one of the superheroes that were on the death pool flyer. Their ability, level, appearance, and gender are unknown.

Hurricane was one of the superheroes that was on the death pool flyer. Their ability, level, appearance, and gender are unknown. However, it can be presumed that they have an ability related to speed or weather. They were revealed to be dead in Chapter 60.

Mistress Emerald is one of the superheroes that were on the death pool flyer. Her ability, level, and appearance are unknown. It is likely that she has an ability related to emeralds. She was revealed to be dead in Chapter 103.

Galaxy-Gal was one of the superheroes that was on the death pool flyer. Her ability, level, and appearance are unknown. Her ability may have something to do with outer space. She was revealed to be dead in Chapter 60.

Venom is one of the superheroes that was on the death pool flyer. Their ability, level, appearance, and gender are unknown. It can be presumed that their ability has something to do with venom. They had the fewest number of bets on them dying.

Zander is a member of the Authorities who came Seraphina's house for questioning Seraphina with his partner Keon.

Bimel is a resident of Branish and one of Waldo's underlings. His ability is Rock Arm, which allows him to turn his arms into hardened stone. He was defeated by the vigilante X-Rei.

Keesh is a resident of Branish and one of Waldo's underlings. Her ability, Hair Growth, allows her to control her hair as extra appendages and make it grow longer for added range. She was defeated by the vigilante X-Rei.

Weim is a resident of Branish and one of Waldo's underlings. His ability, Phantom Fist, allows him to punch objects from a great distance without needing to make physical contact. He was ultimately defeated by the vigilante X-Rei.

Lydia is Quinton's wife and one of the many innocent hostages held by Waldo. 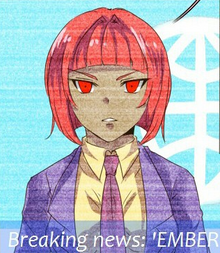 The Newscaster [13] is a red-haired woman with red eyes and brown skin who is seen on television, reporting attacks by EMBER. Her first appearance was in Chapter 6, talking about the murder of X-Static in Lovun.

A lady with indigo hair and lime green speech bubbles who was in Woaba Boba with John and Seraphina in Chapter 6. She called X-Static useless after hearing of his death, much to John's chagrin.[13] 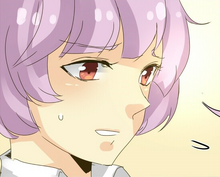 Aria is a waitress who works at Woaba Boba.[14]

Retrieved from "https://unordinary.fandom.com/wiki/List_of_Minor_Characters?oldid=24951"
Community content is available under CC-BY-SA unless otherwise noted.