Crail is a student of Wellston Private High School and one of the school's many, many bullies.

Crail has spiky dark-moss-green hair and blue eyes. He is seen wearing a Wellston school uniform without the vest.

His eyes glow aqua blue when using his ability. 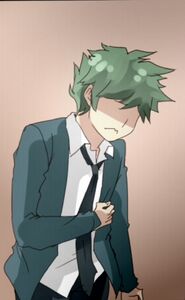 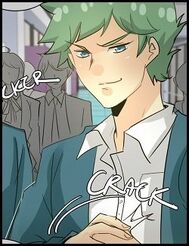 Crail, getting ready to beat someone (John and Sera) up
Add a photo to this gallery

Crail is a typical bully and takes pleasure in beating up those weaker than himself. He also has no concern for his friends as shown when he was about to punch Lin. The only person Crail seems to care about is himself, his sole concern about his actions is how the consequences will affect him.

On John's first day of school, Crail and Lin cornered John to "educate" him.[1] Crail tried to use his Strong Punch on John, but the latter avoided it, and the blow landed on a wall. When Crail tried again, John blocked it and proceeded to kneed his stomach. After Crail recovered from John's knee, he angrily charged towards the cripple, not caring that Lin was held hostage. John pushed Lin away and ran off, prompting the bully duo to chase him.[2]

Due to them having an encounter with John, Crail and Lin were interviewed by Isen. Crail recalled fighting John at one point but did not remember much else than that.[3]

Crail, along with Skrev and Krolik was seen reading a bulletin board article about the crippled Seraphina. Seeing John and Seraphina trying to run away from them, he and Skrev pursue the two, but John fends off their initial attacks. Krolik shot a Lazor at the fleeing duo, pinning them down and giving Crail an opportunity to land a punch to John's face. Crail was determined to finish what he started on John's first day. Seraphina tries to him and Skrev to back down, but they no longer have any reason to fear her. The two are stopped by Blyke before they could try anything.[4] [5]

Crail was involved with holding Seraphina hostage at an abandoned house. He was seen snickering alongside Krolik, Wenqi, Misa, Hower, and others while Illena tortured the former Ace. After Seraphina made two failed attempts to fight her way out, she was tied up once more and left in the house overnight. [6]

He witnessed some of the bullies call out Illena for being "excessive." After Arlo intervened and promised to report their activities to the headmaster, Crail began to worry about the punishment he would face. Krolik's attempts to lighten the mood did not help. Crail and his fellow bullies would meet a masked attacker who would make their bad day even worse. [7]

The said attacker made quick work of Illena and Wenqi, frightening Crail, Krolik, and Misa to attempt an escape. However, the attacker fired an explosive missile, blocking the bullies' escape route. The three decided to try a counterattack, hoping superior numbers would allow them to prevail. Krolik fired his Lazor and injured the attacker, but the wound healed quickly. The attacker effortlessly defeated Krolik and Misa, leaving Crail at his mercy. Crail had a grim feeling that this masked terror was angry about what he and the others were doing to Seraphina, and fell to his knees. He tried to calm him down by explaining that he regretted how far it had gotten and that Arlo had rescued Seraphina. He offered to do anything to make amends, but to no avail. Crail took a knee to the chin, a punch to the face, and was finished off with a kick to the stomach. [8]

According to Darren, serveral students were suspended for attacking Seraphina. It is implied that Crail was one of these suspended students.[9]

Crail was sent falling through the roof of the infirmary much to Doctor Darren's annoyance.[10]

Strong Punch: Crail's ability is Strong Punch, an ability that allows him to punch hard enough to leave a hole on a wall.[2] When activated, his hand and eyes glow green.

Retrieved from "https://unordinary.fandom.com/wiki/Crail?oldid=24389"
Community content is available under CC-BY-SA unless otherwise noted.