See? The mall isn't so bad.

In the afternoon, Seraphina calls John, asking him to make a trip to Kovoro Mall with her. Although he tries to decline by saying his house needs to be cleaned, Seraphina is already outside and enters the spotless, perfectly neat house. Grudgingly, he agrees to go.

They reach the mall and shop at a boutique. John purchases a shirt that has "LAME" on it and Seraphina thinks to herself that it actually doesn't look too bad.

As they leave, John spots an Ability Gauge booth and convinces his friend to give it a try.

In front of them in the queue, Levani is demanding a refund from the Ability Gauge for ranking her ability as a 4.0. Trying to placate her, he explains that she is above average in terms of power as in the Standard Gauging System, 3.0 is average and 5.0 and above is high-tier. However, she is still furious and tells him to refund her money or she will blow up his booth. 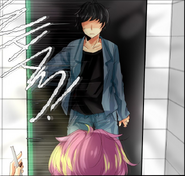 John opening the door of his house for Seraphina.

John and Seraphina queueing for the Ability Gauge. 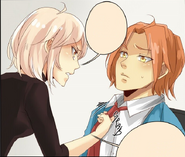 Levani threatening the Ability Gauge.
Add a photo to this gallery

Retrieved from "https://unordinary.fandom.com/wiki/Chapter_8?oldid=25668"
Community content is available under CC-BY-SA unless otherwise noted.