You take that back!.

This is the 79th episode of unORDINARY.

Remi is walking when she sees another newscast of EMBER. She goes to see Arlo and wants to do something to stop EMBER, but Arlo stops her in her tracks. A girl named Melody from Agwin High pours coffee on Remi's head, disliking topics about EMBER. They fight, but when she realizes Remi and Arlo's true identity, they apologize and leave. 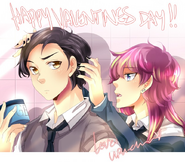 Retrieved from "https://unordinary.fandom.com/wiki/Chapter_79?oldid=24920"
Community content is available under CC-BY-SA unless otherwise noted.