You are literally telling people they're going to die.

This is the 78th episode of unORDINARY.

Arlo is walking down the school hallway when he notices Blyke putting up some fliers. Curious, he asks Blyke what he is doing, and Blyke tells him that he was asked by Remi to put them up. These fliers are warning people to be cautious of possible EMBER attacks around Wellston. Blyke states his incredulity at Remi's persistence on the EMBER issue, saying that she has been on it for a month.

Remi then appears, trying to get Arlo to put up fliers as well and warning an unnamed student in the corridor. Everyone is visibly confused. Arlo tells Remi to meet him later for a drink.

The chapter ends with John moving into the school dormitories, ushered by Keene. On realising he is moving in with Blyke, John (as well as Blyke) are shocked and angry. Keene forces them to shake hands. 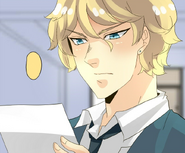 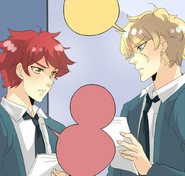 Retrieved from "https://unordinary.fandom.com/wiki/Chapter_78?oldid=22487"
Community content is available under CC-BY-SA unless otherwise noted.