You see... Some jerks broke mine.

This is the 75th episode of unORDINARY.

Next morning, Sera is seen to wake up first with a splitting headache. She then sees Arlo and wonders what's going on and how did she end up in this situation. She then has a flashback of what happened to her and then remembers that her attackers injected her with something. See realizes this and runs towards the bathroom just as John wakes up and Elaine is shown to have been awake. Sera then throws up in the toilet, possibly to get rid of the drug in her body, while John asks Sera if she's okay. Sera tries to use her ability to see if she's normal but it fails and John asks her if she's fine because she's been acting weird.

Sera replies that she needs to check something and runs to John's room clutching the clock trying to stop time but it's revealed that she can't, and she drops to the ground and wonders how did it happen and why it would happen. She starts yelling, which is seen through the text in bold, but John calms her down saying that they shouldn't jump to conclusions as the drug might not be out of her system yet and advises her to give Doctor Darren a call.

Sera agrees and then Arlo and Elaine come into John's room which then Sera asks Arlo why she's here. Arlo replies with a ambiguous response but John fills in the gaps saying that, "After I got home, I called Elaine for help. It just so happened that Arlo was with her, so he tagged along... Last night, while you were still out cold , some guys broke in and tried to take you. We figured they were the same people who drugged you. Thanks to Arlo, we were able to fight them off. But they had some sort of ability dampening effect, so we weren't able to capture them.

Arlo is seen thinking that John is a fake, as John is acting cheerily while with only Arlo and Elaine, John acted impulsively. After giving Sera an explanation, John says to Arlo "Right buddy?" which Arlo is surprised as John isn't acting as the same person as before. John then calls Doctor Darren using Arlo's phone as his own phone was broken due to Arlo's schemes. The chapter ends with Sera having a worried look on her face. 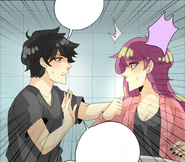 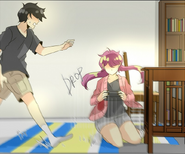 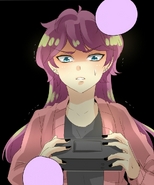 Retrieved from "https://unordinary.fandom.com/wiki/Chapter_75?oldid=25027"
Community content is available under CC-BY-SA unless otherwise noted.