Not everyone spend an entire month planing the downfall of a single person.

This is the 74th episode of unORDINARY.

John and Arlo are recovering from their injuries in the wake of the attackers' violent getaway. When Arlo asks John about his angry glare, John retaliates by calling Arlo incompetent for being incapable of keeping up his barrier and allowing the kidnappers to escape. Agitated, Arlo claims John left Seraphina alone and allowed his anger get the better of him instead of trying to save her which cost them dearly. To this, John punches Arlo in the face, telling him to watch his mouth, which causes Arlo to try and lash out. Elaine calms them down and they separate.

Arlo questions how a knife and van could overpower two high-tiers and concludes that the attack was planned. Elaine wonders how they were all weakened at the same time and mentions her lack of healing. John realizes why he was so weak and couldn't sense her aura before activating his ability.

Arlo questions why they would leave when they got what they wanted with Elaine mentioning that they mumbled something. John quotes one of the attackers talking about something wearing off and states that there was seemingly some time limit. Elaine mentions her healing came back after they left and Arlo concludes that the ability weakening most likely lasted for a certain period only, hence why they left. Arlo concludes that Seraphina was weakened, and escaped after being drugged, but was tracked.

Arlo remembers the micro-chip Remi mentioned she found in the Teddy Bear that she and Seraphina got from Kovoro Mall. Arlo asks John about it and says the chips were most likely trackers. Arlo asks if Sera went back to the dorm, with John realizing that she stopped by his house first, with Arlo concluding that John's house was under surveillance ever since that incident.

John is skeptical about it and calls it a coincidence. Arlo questioned that theory due to it being inconsistent with the facts known. John said Seraphina said nothing about a tracker. He then says that not everyone spends a month planning the downfall of a single person, which reminds Arlo of his plan to revert John back to his old self. Elaine silently freaks out over the two, both more powerful than her, fighting each other, as an awkward silence passes over the group. After a while, John and Arlo begin to ponder the motive of the attackers. 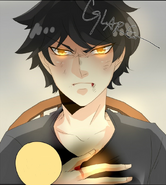 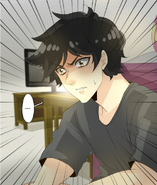 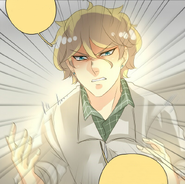 Retrieved from "https://unordinary.fandom.com/wiki/Chapter_74?oldid=17484"
Community content is available under CC-BY-SA unless otherwise noted.