I can't believe I just spent all that time talking to someone like you!

John has a flashback to his first day at Wellston.

After class on his first day, Elaine welcomed John friendlily, but shunned him in disgust when she learned he has no ability.

Later, Crail and Lin threatened John and decided to "teach" him about the hierarchy of their school. At that moment Seraphina walked passed them and John asked her for help, but she turned away and ignored him.

In the present, John is woken up by his phone ringing.

Elaine pushing down John after learning he has no ability 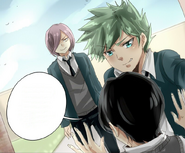 Retrieved from "https://unordinary.fandom.com/wiki/Chapter_7?oldid=25661"
Community content is available under CC-BY-SA unless otherwise noted.