Are they really... Trying to kill me!?

This is the 69th episode of unORDINARY.

After being stabbed, Seraphina realizes the attacker's real intention is to kill her. She elbows the attacker who had stabbed her, and turns around to see two of the other attackers getting up. Seraphina freezes her wound, then quickly takes out the others with the knife she had been stabbed with. She notices the attacker who had injected the substance into her escaping. She is about to go after him, however, much to her surprise, the wound unfreezes on its own. Seraphina realizes that there was more damage to her powers than she had previously thought and quickly leaves, thinking that her wounds could hinder her from being able to take on another attack.

On the way back home, others see Seraphina limping, and become worried. Seraphina, who is still holding her wound, is approached by a man. Worrying that he is also part of the group that just attacked her, she pulls out the knife from before, and threatens the man not to come any nearer, then runs away.

John returns from school in a good mood. It is Friday, and he would be helping Seraphina move back into the Dormitory. However, when he gets to his house, John is shocked to see blood on the door handle. He quickly goes inside to find Seraphina wounded on the floor, trembling, with the knife still beside her. 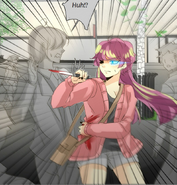 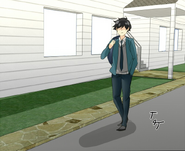 Retrieved from "https://unordinary.fandom.com/wiki/Chapter_69?oldid=14403"
Community content is available under CC-BY-SA unless otherwise noted.