Something isn't right. I should've been able to avoid that easily.

This is the 68th episode of unORDINARY.

The blonde woman following Seraphina stops her and asks for the time. Seraphina feels a sensation out of a sudden, and drops her phone. Her phone cracks, but she waves it off and tells the lady the time.

After the lady leaves, Seraphina continues her way home, and realizes that she has been trembling after she felt that sensation. Suddenly, a van nearly crashes into her, but she dodges in time. She realizes that her ability isn't working as well as before for some reason. The people in the van get off and ask if she is alright, and tries to take her to a hospital. While Seraphina is off-guard, a man, possibly a member of the gang, appears behind her through a portal and injects something into her. Seraphina immediately realises that the gang does not mean well and knocks them down instantly, while suffering from the wound. To her surprise, she cannot rewind the injection. She then interrogates the person who ambushed her, but is stabbed in the back by another member with a knife before she can get the information she needs. 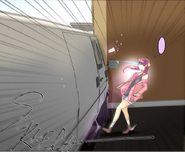 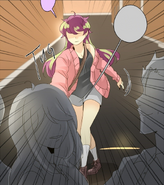 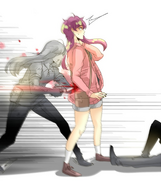 Retrieved from "https://unordinary.fandom.com/wiki/Chapter_68?oldid=14380"
Community content is available under CC-BY-SA unless otherwise noted.