You're afraid of him too?

This is the 67th episode of unORDINARY.

In the school infirmary, Keene and Doctor Darren are having their usual morning conversation. Keene notes that something is wrong and asks Darren about it, only to find out that Leilah had cancelled their date as her employer is sending her away for two weeks. Keene notes that it is on a very short notice, and Darren agrees, hoping that everything works out.

In the corridor, Elaine bumps into Arlo and tries to avoid him, but to no avail. Arlo asks her what is wrong, and Elaine again tries to avoid the conversation and leave but fails when she is stopped by Arlo. Upon further questioning about her restlessness, she confesses to Arlo that she has found out about John's powers and that he was the one who badly injured Arlo, Meili and Ventus. She is now extremely afraid for her life since she now knows John's secret, and thinks that he will come after her at any moment. She thinks that something is terrifying about John, and does not want to get involved in their business. Arlo consoles her by saying that as long as she keeps it a secret, everything will be fine. Elaine then asks if he is doing the same thing because he too is afraid of John. Arlo turns away, not knowing what to say. Meanwhile, an invisible guy, eavesdropping throughout their conversation, turns and runs away, but seems to have been noticed by Arlo.

At John's house, Seraphina has finished packing her luggage and decides to go for a walk to kill time. She buys a drink at Woaba Boba and leaves. A blonde woman sitting outside spots Seraphina, and starts following her, to her unawareness. 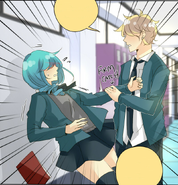 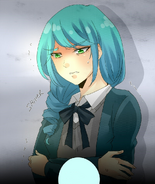 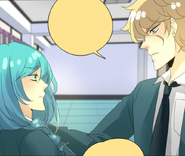 Retrieved from "https://unordinary.fandom.com/wiki/Chapter_67?oldid=15228"
Community content is available under CC-BY-SA unless otherwise noted.