The longer you keep it hidden... The worse it'll get.

This is the 66th episode of unORDINARY.

John and Seraphina are saying their goodbyes to William, who is leaving Wellston. John wills his father to stay for a while more than just one night, but William says that his editor won't let him leave for long as he is working quite a number of projects now. William says that he just came to check on John and make sure that he isn't doing anything crazy, and confirms that it is because he still doesn't trust John, but is happy to know that Seraphina is reliable to keep John in check. Seraphina compliments him on writing Unordinary and staying strong despite being a cripple, and asks him to take care of himself. William then hugs the duo, embarrassing John, and tells him to keep his warning in mind. John brushes it off, asking William to not worry and get home safely. William leaves, but is still concerned, remembering a crying Claire and silently hopes that John makes his choices carefully and does not ruin everything this time.

John and Seraphina come back to the house after sending William off in a taxi. John asks Seraphina if she is excited to go back to school, to which Seraphina gives a negative response, saying that it will be a drag as everyone will be talking about her the moment she comes back. She then says that things will be easier if she got expelled as she can then do whatever she wants. John disagrees, thinking that nothing good comes out of having that kind of fault on their record, being someone as strong as Seraphina. Seraphina then points out that she is just joking, but it is true that going back is not pleasant, especially after she has enjoyed a week where she can clear her head and relax. John encourages her and says that she will be okay.

At Seraphina's house, Keon and Zander ring the doorbell, and Seraphina's Maid answers it. Keon tells her that they are there on behalf of the authority, and the maid replies that neither the Sir nor the Madam will be home until next week. Keon then says that they have been instructed to question Seraphina before her suspension ends to verify that she is indeed 'ready' to return to school and would like an audience with her. They then try to step into the house but are stopped by the maid. She explains that Seraphina is not home either and has returned to Wellston, and it is best for the two to wait until she returns to school if they wish to find her, because she has not been informed of Seraphina's whereabouts. Keon then gives in and leaves with his assistant. The maid closes the door in relief. 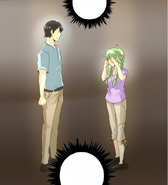 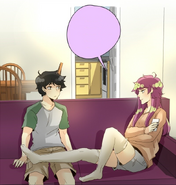 Retrieved from "https://unordinary.fandom.com/wiki/Chapter_66?oldid=26646"
Community content is available under CC-BY-SA unless otherwise noted.