I just wanted to shut them all up!

This is the 63rd episode of unORDINARY.

John demands for a reason for his father's visit, to which his father replies, a little irritated, that it was due to John's hanging up and ignoring of his calls. John then asks Seraphina to give him and his father a minute, and Seraphina agrees. After William laments that John does not treat him well and puts down his bag, they both get out of the house to talk.

Once outside, William tells John, in mild anger, that he expects an answer when he calls and, when John did not call him back, thinks that something bad had happened, leaving him no choice but to come and check on John. John apologizes but argues that he was doing fine. To that, William teases him about living together with a girl. John defends himself as he only did that so that Seraphina does not end up stranded outside. This leads to a discussion about Seraphina, where William compliments her and brings up the question he asked her earlier regarding who is more powerful out of the two. John does not take this well and explodes, asking his father why he asked that. He then turns relieved when William says that Seraphina did not take the question seriously. William sees his relief as shady behavior and asks him about it. When John does not give a straight answer, William, out of annoyance, says that he will ask Seraphina instead, only to be immediately stopped by John. John finally admits to his father that he had been acting as a cripple, and William is shocked and confused by his actions. He asks John for the reason of that choice, and John confesses that he was tired of being watched for every move back in New Bostin High School, when he was the King and abused his power. He then goes on to say that everything is fine as he has Seraphina behind his back, which William silently disagrees with, thinking that one cannot just depend on a single person. Then, William points out that John is still not making sense as he is lying to Seraphina despite 'trusting' her, and asks when is he going to tell the truth. John responds aggressively and then says that he finds no reason to tell her the truth for now. 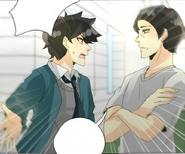 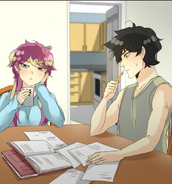 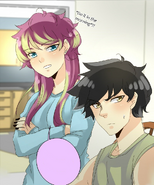 Retrieved from "https://unordinary.fandom.com/wiki/Chapter_63?oldid=13936"
Community content is available under CC-BY-SA unless otherwise noted.