Of the two of you... Who is stronger?

This is the 62nd episode of unORDINARY.

William H. Doe, John's father, arrives at the airport and plans on visiting his house. Meanwhile in Wellston Private High School, Arlo and Holden are walking across the hallways. Holden notes that Arlo has been spacing out and asks if he is okay, only to be cut off by John bumping into Arlo's shoulder. They each exchange disgusted looks at each other, and John starts to walk away before Holden grabs him by the collar, noticing that he was the same person that bumped into him before. Before he tries to beat John up, however, Arlo defends him and grabs his friend's arm, crushing it. After giving him a lecture, Arlo lets go and starts to walk away, leaving his friend bewildered at his actions. Arlo then thinks about how John is selfish for keeping his power to himself and influencing Seraphina to change her ways, leaving him to deal with all the burdens. From a distant corner Isen has been watching the whole scene and is tempted to report about the drama between the two kings, but holds himself back in fear that John's and Arlo's wrath would go to him.

Meanwhile at John's house, Seraphina, playing on her phone, looks up as the door opens, expecting to see John return home, only to find his father instead. The two recognise each other and chats for a bit, talking about her suspension and how she had been living in his house. William then asks Seraphina who was stronger, to which Seraphina laughs, considering it a joke rather than a serious statement. Then, John arrives home and expresses shock and confusion at the sight of his father. 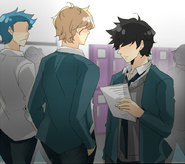 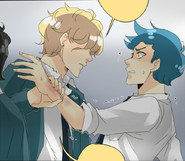 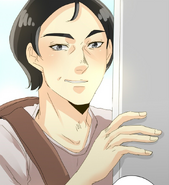 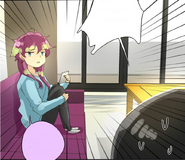 Retrieved from "https://unordinary.fandom.com/wiki/Chapter_62?oldid=18200"
Community content is available under CC-BY-SA unless otherwise noted.