We'll get to the bottom of this.

This is the 61st episode of unORDINARY.

Isen is spying on John, watching his confrontation with two bullies. John calls the two "garbage" and in anger, one of them grabs him by the collar and starts to threaten him. Isen intervenes, however, and the two run off in fear. John did not appreciate his help and smacks his hand away when he asks if he is okay. John leaves while Isen thinks to himself that he needs to keep John under control until Seraphina returns.

After school, Remi meets Arlo at a bench, and the two greet each other in a jokingly mean way and talk about the recent events that occurred, such as Remi's encounter with the vendor at the mall. She talks about the newest article and how accurate it was, leaving suspicions that she was being followed in the mall. Remi then talks about the rumors that had been going around of Arlo going to the infirmary, which he denies. Arlo realizes that they both are being followed, and asks Remi to tell him exactly what happened. She does, both realizing that all of the high-tiers were being followed. She then realizes that the rumors about Arlo going to the infirmary are true and shouts at him in disbelief that he would lie to her. Remi starts to talk about Rei and how they both were hiding things from her, making her feel useless. She starts to cry, and Arlo puts his hand over her shoulder in remorse. After Remi calmed down, Arlo contemplates on who had been following them and their purpose. 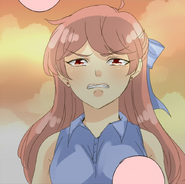 Retrieved from "https://unordinary.fandom.com/wiki/Chapter_61?oldid=13867"
Community content is available under CC-BY-SA unless otherwise noted.