And yet another self-proclaimed "Superhero" falls victim to the consequences of everyday society...

Doctor Darren returns to the infirmary, dragging Blyke and Isen behind him, and yells at them for causing such a racket. When they start to argue again, he bashes their heads together and explains the consequences of their actions. In the middle of his lecture, Gavin reaches the infirmary and Doctor Darren realizes that John and Seraphina have already left.

At Woaba Boba, John tells Seraphina about his fight with Gavin. When Seraphina unwittingly makes an insensitive comment, they start to argue about high-tiers. Meanwhile, a news programme about EMBER's most recent murder, of the vigilante X-Static, comes on television. 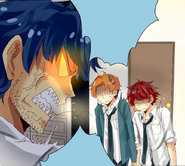 Doctor Darren on Isen and Blyke 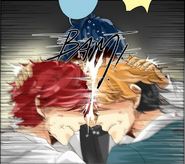 After arguing in front of Doctor Darren.

Doctor finds out John has gone 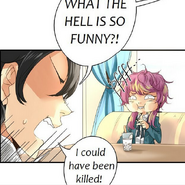 Original version of this scene 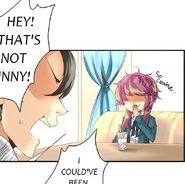 Current version of this scene

John and Sera at the cafe

Retrieved from "https://unordinary.fandom.com/wiki/Chapter_6?oldid=25660"
Community content is available under CC-BY-SA unless otherwise noted.