This is the 59th episode of unORDINARY.

Arlo goes to the infirmary for some medicine from Doctor Darren to heal his wounds from the fight with John. In the infirmary, Doctor Darren and Keene talk about the investigation that Keene was assigned with, and the Doctor's new girlfriend, Leilah. They are then interrupted by Arlo and are surprised to see him injured. Keene asks Arlo who is the cause of the injuries, but Arlo refuses to reveal anything. After Arlo leaves, the two discuss about his injuries and guess that John is the one who caused them, with Doctor Darren questioning if they should tell the headmaster about John's recent behavior.

Later at school, rumors about Arlo being injured spread around, which Blyke and Isen overhear. Blyke does not believe it, but Isen, knowing John's true powers, laments in his mind about how Arlo's obsession over keeping things in order has led to him being dethroned. 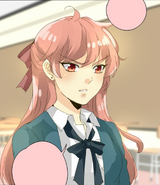 Retrieved from "https://unordinary.fandom.com/wiki/Chapter_59?oldid=15226"
Community content is available under CC-BY-SA unless otherwise noted.