This is the 58th episode of unORDINARY.

Elaine picks up the call from Seraphina, and agrees to meet with her. As she turns to leave Arlo and the unconscious Ventus and Meili, Arlo grabs Elaine's wrist, and reminds her that she shouldn't forget what she promised.

Back at John's apartment, Seraphina offers John a glass of water and asks him about what happened. John, after a moment's hesitation, replies that after Seraphina left, everyone targeted him, the weak friend. Seraphina tells John that's not what she asked. Instead, she says "I've never seen you break down like that before" and "That's not right!" John tries to dodge the truth, saying he is fine now, and he was surprised that Seraphina came back so soon. In an attempt to change the subject, John inquires Seraphina about how she's doing and where she's been.

However, Seraphina sees right through the tactic, and tells John to not change the subject. John continues to ask Seraphina about her disappearance since she was never online. Seraphina states her parents cut her internet, but Seraphina convinced them to send her back early. Unwavering, Seraphina orders John to explain his story. John, again, avoids the full event and responds that he was sick of the bullying and didn't want Seraphina to come back seeing him look so defeated. He then adds that since Seraphina is back, everything could go to the way it once was. Seraphina looks shocked at this news.

A moment after, Elaine rings the doorbell, and tells Seraphina she was hanging out with a friend, although she almost says 'Arlo'. Elaine then apologizes about how she turned in Seraphina for having Unordinary. Seraphina answers Elaine, saying she wasn't wrong in doing it and has no need to apologize. When Elaine walks iton the room, she sees John and disrespectfully yells "What's he doing here!?" John retorts that he lives in this place, and Seraphina goes upstairs to start unpacking her luggage.

As Elaine is healing John, she insults him by saying he's a loser and she wouldn't waste her energy on him if he wasn't friends with Seraphina. She looks down on John, saying he's always getting into fights he can't win, and tells him to get a clue. John notices that her aura is weaker than usual, and figures she must have already spent he ttime to heal someone else beforehand.

John tells Elaine that she doesn't have to heal his other arm, but she insists and grabs it anyway since it was Seraphine who had asked her. As Elaine is healing John's arm, she realizes the bones are all shattered, which seems familiar to her. Suddenly it hits Elaine that the shattered bones on one of John's arms are from Arlo's Barrier, and the slashes on the other are from Meili's Demon Claw. As Elaine comes to the conclusion that John must have fought Arlo, Ventus, and Meili, she exclaims, "That's impossibl-" before John grabs her face, cutting Elaine off. John tells Elaine to shut up and listen to him carefully.

When Seraphina comes back downstairs into the room, Elaine is gone. Seraphina asks where Elaine has gone. John says that Elaine had something urgent that came up, and she needed to go. Seraphina finds that the situation is off as Elaine left without saying goodbye. 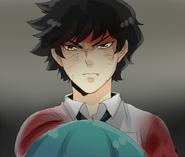 Retrieved from "https://unordinary.fandom.com/wiki/Chapter_58?oldid=22330"
Community content is available under CC-BY-SA unless otherwise noted.