This is the 57th episode of unORDINARY.

Elaine runs onto the scene. She runs to Arlo and is shocked at the scene of everyone injured, so she questions Arlo about what happened. Arlo tells Elaine to calm down, to which she does and begins healing Ventus and Meili. She thinks to herself how they were defeated. Arlo then coughs, turning Elaine attention towards him. She begins to question him again, but Arlo demands that she never speak of what she saw.

On the other hand, John is walking back home. He thinks about why he is always betrayed, and throws his backpack. Seraphina, sitting on John's doorstep, yells to him, while she also sees him and goes to pick up his backpack. John then sees her and falls to his knees, showing regret towards what he did. Seraphina questions his injuries, but John doesn't answer. Instead, he wishes to not be looked at. Seraphina is shocked by John's behaviour and they go inside. While inside, Seraphina calls Elaine. 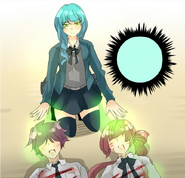 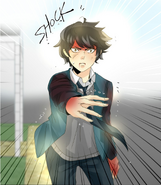 Retrieved from "https://unordinary.fandom.com/wiki/Chapter_57?oldid=13317"
Community content is available under CC-BY-SA unless otherwise noted.