Who said you could interfere?

This is the 55th episode of unORDINARY.

Beginning where Chapter 54 left off, John tries to use Meili's Demon Claw on Arlo. However, Meili herself protects Arlo from John. She is surprised that he too has Demon Claw, believing it to be his ability. John then cuts her down, and is preparing for the kill, when Ventus uses Whirlwind on John. John then uses Ventus's own ability to keep afloat, stunning everyone watching. He then sends Meili flying and stabs Ventus, preventing him from saving her. Ventus pleads and begs John to allow him to save her from her doom, but a merciless John only attacks Ventus over and over again. As Meili comes crashing down to her apparent demise, John stabs Ventus, seemingly fatally, glaring at Arlo. The smirk from Arlo's face is gone, replaced by a serious expression, as he contemplates John's true nature. 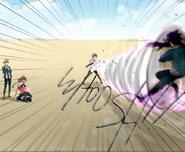 Retrieved from "https://unordinary.fandom.com/wiki/Chapter_55?oldid=21725"
Community content is available under CC-BY-SA unless otherwise noted.