This is the 53rd episode of unORDINARY.

John follows Arlo to help him with his 'errands'. They board the train which takes quite some time before they reach their destination. It turns out to be the Wellston Turf War battlefield and although John is sceptical, he follows Arlo only to find that the people Arlo wanted to meet are the ones who that broke his phone earlier. They attack him and pin him down before he can react as Arlo triumphantly gloats behind them. 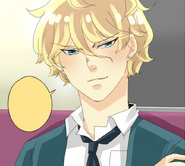 Retrieved from "https://unordinary.fandom.com/wiki/Chapter_53?oldid=12953"
Community content is available under CC-BY-SA unless otherwise noted.