At the infirmary they heard a rumble, Doctor left for the area from where the sound was coming and warned John to stay in the infirmary, knowing that John and Seraphina would still leave, but still left them. Both of them left shortly after.

Gavin recovered consciousness and stumbled out of a bush beneath the window John threw him out of. At the same time, John appeared in front of him and rushed toward and grabbed him, but when Gavin was about to hit John, he saw Seraphina behind John who warned him to stop. Instead of stopping, Gavin tried to challenge her but got beaten immediately.

Doctor Darren rushing to the site of Blyke and Isen's fight 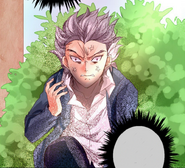 Seraphina knocking out Gavin
Add a photo to this gallery

Retrieved from "https://unordinary.fandom.com/wiki/Chapter_5?oldid=25659"
Community content is available under CC-BY-SA unless otherwise noted.