YOU DON'T KNOW WHAT YOU'RE GETTING US ALL INTO!

This is the 46th episode of unOrdinary.

On the rooftop, John apologises to Arlo for his aggressive behaviour in the infirmary and thanks the King for saving him in a friendly manner. However, Arlo rebukes his thanks and says that he saved him because he was annoyed by how Tanner, Wenqi, Illena, and Rouker were unfairly teaming up on him.

When Arlo brings up how John might not have lost to them if they had fought him one-on-one, he uses it as an opportunity to reaffirm his powerlessness and try to disperse Arlo's suspicions about his behaviour, then leaves cheerfully.

Meanwhile, Isen is fearfully sneaking around the corridors of the school, on guard for any signs of Arlo. As he learned more about John, he quickly found himself trapped between a rock and a hard place; exposing John might mean little less than certain death for him, considering the fate of his New Bostin classmates, but disobeying Arlo's orders and ignoring him would also result in a confrontation he could not possibly come out from unscathed.

Suddenly, Arlo sneaks up on Isen from behind, scaring him witless. When he tries to flee, Arlo simply creates a Barrier around them. Arlo brushes aside Isen's feeble excuses and the latter is forced to admit that he simply wants to give up the investigation. After Arlo says that John is not in his rightful place, Isen foolishly asks who he is to decide that, provoking the King's ire.

A furious Arlo smashes Isen into the Barrier and extorts the truth out of him: he is afraid of exposing John because of what the "cripple" might do. Upon hearing this, Arlo releases Isen, but says that he will finish the investigation and expose John, with or without Isen's help. As Arlo leaves, Isen screams desperate pleas at his retreating back. 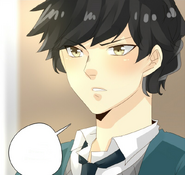 Retrieved from "https://unordinary.fandom.com/wiki/Chapter_46?oldid=11893"
Community content is available under CC-BY-SA unless otherwise noted.