You're gonna lose everything!

This is the 44th episode of unORDINARY.

Arlo is reading the school newspaper while looking after an injured John in the infirmary. The front page article, an analysis of the attacks by EMBER, was written by Isen, and Arlo remarks that Isen's article is on top, once again.

In John's mind, a flashback of John sitting alone in the rooftops of New Bostin High School and looking grim is occurring. He is found by Adrion, one of his underlings from when he was King, who hesitates to inform him of something, causing him to become aggressive and almost attack Adrion.

Adrion informs John that Claire had a vision of John rising to the top at New Bostin, which was the only reason she had helped him out when John was so weak and isolated in the past. That way, John would trust and rely on Claire. John refuses to believe any of it and starts to attack Adrion, but the latter insists that Claire is only using John for her own purposes and that she had a vision about him being overthrown by the Jack. Finally, Adrion tells John that Claire is already gathering people to attack him behind his back. Hearing this, John snaps and beats up Adrion. But Adrion pleads that he was behind John since the first day he met him, and that he would never betray his trust. He warns John that if he continues the way he is, his own ego will be his undoing and that he will lose everything. Following this, John furiously rebukes Adrion, reminding him how strong he is. Then the memory changes, showing events that transpired between him and Claire in the past.

John jerks awake wildly, and attacks Arlo on impulse. He questions why the latter had saved him, and what his motive was. But Arlo calmly reminds him that he shouldn't be so full of himself, and remember where his place lay in things around him. He also warns John to mind his manners around him and leaves. This leaves John to wonder what he has been doing all this time. 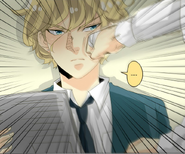 Retrieved from "https://unordinary.fandom.com/wiki/Chapter_44?oldid=9232"
Community content is available under CC-BY-SA unless otherwise noted.