Who gave you the right to speak?

This is the 43rd episode of unOrdinary.

Rouker, Wenqi and Illena continue their assault on John as he braces himself for the incoming assault. Due to his flashback of Claire, he refuses to face them head-on using his powers. He counters a hit from Illena and returns the favor. Rouker fires two Missiles in his direction that narrowly miss him, and John surmises that his intention was to prevent his escape. Wenqi gets behind him and delivers a blow to the back of his neck and Tanner, who after having his arm broken by John earlier, regenerated with his ability and launches a sneak attack on John, hitting him squarely in the face. An angered Illena recovers from John's punch and pounds him to the ground. The four gang up on him and prepare to beat him up some more. However, just before Illena could perform the deed, a yellow barrier manifests in-between them and breaks her arm.

The Barrier protects a crouching John from further harm. The four bullies freeze in their track to witness Arlo's sudden arrival. Arlo being the King, the bullies respect him. As he makes his way over to John, he becomes angry after seeing the condition he is in. Tanner proudly describes his actions to the King, but much to his disappointment, Arlo is not impressed. Arlo forces him to the ground with his Barrier and scowls at him for having the audacity to talk back to the King.

Supporting John onto his shoulders, Arlo and John go to the infirmery. Taking another look at the John's beaten form, Arlo wonders why the latter didn't defend himself, despite having abilities, and would rather be beaten down so badly. 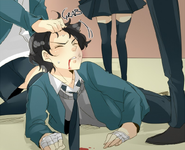 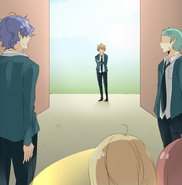 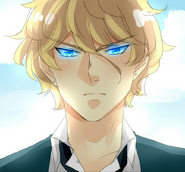 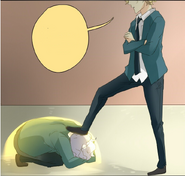 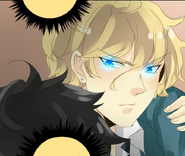 Retrieved from "https://unordinary.fandom.com/wiki/Chapter_43?oldid=25743"
Community content is available under CC-BY-SA unless otherwise noted.