I don't want the authorities meddling into my business.

This is the 41st episode of unOrdinary.

Keene, a bespectacled man with brown-blonde hair, knocks on Headmaster Vaughn's office and is welcomed inside. The headmaster tells him to sit down, and they begin to discuss how more and more high-tiers have been dying lately due to EMBER. Then the headmaster mentions a boy named Rei, who graduated four years ago and used to be the King before Arlo. He says that he was recently killed, which surprises Keene. Apparently he got ahold of a copy of Unordinary shortly before his death, and the principal then mentions that this is the second time an incident involving Unordinary has been tied to his school. He tells Keene to keep an eye out for authorities, as he wants "no one meddling in his school".

Meanwhile, Arlo's blue-haired (Holden) friend is walking in the hallway and spots Isen staring out a window. He hides behind a wall, wondering what Isen is up to. As it turns out, Isen is watching John, who still has his messy hairstyle and was sulking against the school walls. A group of bullies walks up to him and starts to tease him, so John gets angry and breaks one of the bullies' arms, swearing loudly. The three other kids get angry and power up. As they start to run towards him, ready to avenge their friend, John's eyes begin to glow. 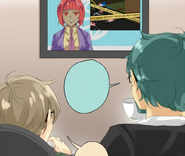 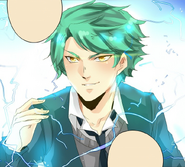 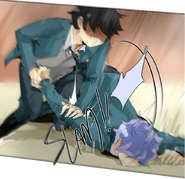 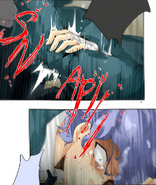 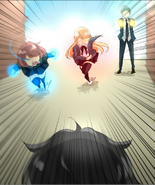 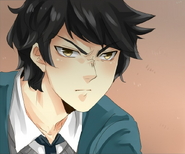 Finally John.
Add a photo to this gallery

Retrieved from "https://unordinary.fandom.com/wiki/Chapter_41?oldid=23060"
Community content is available under CC-BY-SA unless otherwise noted.