So, John. Back again with the broken arm?

In the Infirmary, Doctor Darren berates John on not being careful and getting into fights. Due to his broken arm, the doctor forces John to stay in the infirmary for three hours while a green tonic mends his broken bones.

John texts Seraphina for company and they play Slappy Pig together. When Seraphina asks John what the creepy look is for, he responds by showing his score to her in a dramatic fashion, causing her to react in a surprised fashion. Seraphina then shows John her score, beating John's high score of 187 by 25 points, but John complains it doesn't count as she used her ability.

They almost begin to argue, but are stopped by a sudden rumbling.

Sera and John wasting their time in the infirmary. 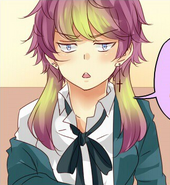 Retrieved from "https://unordinary.fandom.com/wiki/Chapter_4?oldid=26830"
Community content is available under CC-BY-SA unless otherwise noted.