Why'd I have to get stuck with you?

- John and Seraphina to each other

This is the 38th episode of unOrdinary.

As the deadline for the second part of the literature project approaches, Seraphina and John head to the library to study Spearshake's McBetch. However, they are still unable to work together well and John has trouble understanding the material.

Due to this, they get an A-. While John is overjoyed with his grade, Seraphina is less than happy, leaving John wondering why she is never satisfied with anything.

Overhearing two girls criticizing Seraphina, John steps in to defend her, but the girls start beating him up. Moved by John's selflessness, Seraphina intervenes to protect him from further harm. Unfortunately, John is already injured and needs to go to the infirmary. 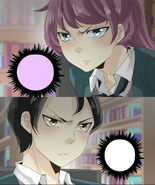 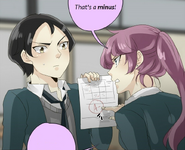 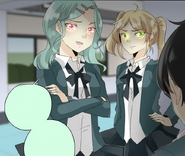 Retrieved from "https://unordinary.fandom.com/wiki/Chapter_38?oldid=8587"
Community content is available under CC-BY-SA unless otherwise noted.