A weakling without fear. Where the hell does he belong?

This is the 35th episode of unOrdinary.

While waiting on the roof for John, Arlo views the everyday goings-on of Wellston below him: the stronger bullying the weak, the similarly-levelled getting along, and the strongest fighting to rise to the top. He reflects on the current social hierarchy, which he considers natural, but scorns John for being an odd piece, someone who doesn't fit into the pre-existing mold built for him, a cripple who doesn't grovel and cry before high-tiers.

When John arrives, in a bad mood from everything that happened in the past few chapters, he demands to know what Arlo is doing on the roof. Arlo retaliates by pointing out that the roof is reserved for Royals, but John ignores him and sits down to eat.

Despite repeated threats to beat him up or even kill him, John is unfazed and tells Arlo that there's no satisfaction in beating up people much weaker than oneself. Finally, when Arlo kneels down to face John directly and makes one last threat, John tells him to be grateful. The surprising answer shocks Arlo, and John follows up by saying that he must be doing his job as King properly if all but one of his subjects obey him; after all, a King is powerless without a kingdom.

With that comment, John finishes his lunch and walks away, leaving Arlo completely baffled. He thinks to himself that only people who have stood at the top have confidence like that and wonders who exactly John was at New Bostin High School 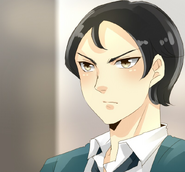 Arlo, surprised by John's answer on why he (Arlo) won't beat him (John) up

Retrieved from "https://unordinary.fandom.com/wiki/Chapter_35?oldid=18841"
Community content is available under CC-BY-SA unless otherwise noted.