I'm not in the mood for any bullshit today.

- John, after elbowing his assailant in the face

This is the 34th episode of unORDINARY.

Seraphina's Mother has returned from her business trip and asks the maid about Seraphina's behaviour. The maid tells her that Seraphina has changed a lot: she sits in her room playing video games and socialising all day and only comes out to eat meals. Seraphina's Mother's face turns to irritation.

Meanwhile, Seraphina is looking up fashion trends online, but the website starts buffering, so she goes outside to check the router. However, she runs into her mother, who scolds her for acting like her sister and confiscates her phone and shuts off her wi-fi.

Back at Wellston, John arrives home, only to find that Seraphina is not online yet. After playing Angry Pigs for a while, he gets stuck on a level and notes that Seraphina has still not come online.

The next day, at lunchtime, Hower assaults John as the latter is going to the roof, but John simply dodges his Heat Palm and elbows him in the face, breaking his nose. He warns him that he is "not in the mood for any bullshit today" and leaves.

On the rooftop, he sees Arlo, who appears to have been waiting for him to arrive.

Seraphina's mother is back 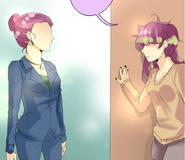 Seraphina and her mother 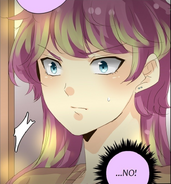 Seraphina giving her phone to her mother 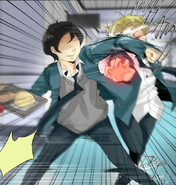 John elbowing Hower in the face

Hower, with his nose broken from John's counterattack

Retrieved from "https://unordinary.fandom.com/wiki/Chapter_34?oldid=8653"
Community content is available under CC-BY-SA unless otherwise noted.