Give me one reason why I shouldn't beat your ass right now!

This is the 33rd episode of unOrdinary.

John is walking down the hallway, roughed-up from his fight with the phone-breaking bullies, when yet another bully pushes him onto the floor.

As he struggles to collect all his papers, Remi spots him and bends down to help him. Unfortunately, John, who is delusional from anger and the constant bullying, thinks she is Claire. He slaps her away, calling her a "bitch", but realises what he has done moments later.

When he tries to apologise to her, an infuriated Blyke blasts a locker right next to his head with a concentrated and precise Energy Beam, threatening to beat him up. John tries to explain what happened but fails to. Remi and Blyke leave, but clearly upset or dissatisfied.

Hearing his schoolmates whisper about him derogatorily around him, John snaps and changes the sentiment he expressed in the Prologue: his schoolmates aren't worth anything.

Later, John chats with Seraphina over his computer and she consoles him over the loss of his phone, noting how uncharacteristic of him it is to be upset about something for so long. Cheering up, they talk about Angry Pigs and schoolwork. John relaxes and lets himself smile for the first time that day. 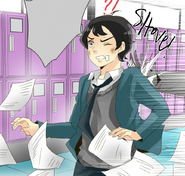 Retrieved from "https://unordinary.fandom.com/wiki/Chapter_33?oldid=7908"
Community content is available under CC-BY-SA unless otherwise noted.