- John to Seraphina on his rough day.

This is the 31st episode of unOrdinary.

John texts Seraphina to ask if she has free time to talk. When she calls back, John says her voice sounds like he hasn't heard her in forever.

John forgot his homework for the last two periods due to his stay at the infirmary, but Seraphina is able to send him copies of the assignments. She then introduces a new game to John, Angry Pigs. John tries the new game out once he finishes his homework, but constantly lost. Despite glass being the strongest material in the game, John vowed to beat it without glass. Unfortunately, it was already past 1a.m.

While John was distracted, he almost bumps into Arlo for the third time, but gets away with a reminder to watch where he is walking. Seeing that Seraphina's suspension hasn't affected him too badly yet, Arlo decides to destroy another one of his ties to his friend: his phone. 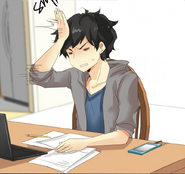 Retrieved from "https://unordinary.fandom.com/wiki/Chapter_31?oldid=7913"
Community content is available under CC-BY-SA unless otherwise noted.