This is the 28th episode of unOrdinary.

Continuing directly from where the last chapter ended, Elaine receives a text from Arlo, telling her to inform Headmaster Vaughn about Seraphina's possession of Unordinary.

At school, an announcement summons Seraphina to Headmaster Vaughn's office. Seraphina arrives at the waiting room and angrily glares at Elaine, who told him about her copy of Unordinary, before fixing her off-shoulder school jacket and entering the office.

Inside the office is Miss Nadia, a government official who is at Wellston Private High School to interrogate Seraphina about her possession of Unordinary. After warning Seraphina that any false answers will be detected and result in her expulsion, she begins the interrogation.

First, she asks Seraphina if it is true that she had a copy of Unordinary and how long she had possessed it. Then she asks her where she found it.

Seraphina deduces that Nadia simply has a lie-detection ability rather than mind-reading and is able to fool her by telling her about the attack by the invisible entity and stating that the book was in her shopping bags when she arrived back at her dormitory, without explicitly stating who gave it to her.

Nadia then asks where the book is and if she shared its contents with anyone while it was in her possession, Seraphina revealing that she destroyed it through unknown means. Finally, Nadia asks her what she thought about the book and although she did read it, all she has to do is tell Nadia that she thought the book was absurd.

Headmaster Vaughn then interrupts Nadia before she can ask Seraphina if anyone was with her during her trip to Kovoro Mall, sparing her having to betray John, and the interrogation ends.

Meanwhile, John receives a text from Seraphina in class and heads to the school gate, as per the text. He finds Seraphina with a suitcase, standing next to a car, and she reveals that she is being suspended from Wellston for a month. Although John is worried, she reassures him that after she returns, the whole debacle will be behind them, then leaves in her limousine.

John waves goodbye at her and returns to the school, which has now taken on an aura of gloom due to his friend's absence. 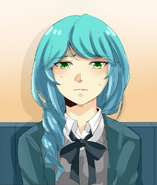 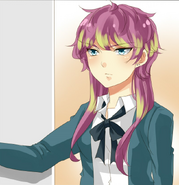 John and Seraphina at the school gate

Seraphina telling John about what happened

John telling Seraphina to think about herself

Wellston without Seraphina
Add a photo to this gallery

Retrieved from "https://unordinary.fandom.com/wiki/Chapter_28?oldid=7860"
Community content is available under CC-BY-SA unless otherwise noted.