We may be strong... But we're far from invincible.

This is the 25th episode of unOrdinary.

Remi comes to visit Seraphina and thank her for substituting as Queen, despite how much she dislikes working with Arlo. Seraphina tells her it's nothing compared to how Remi has taken the burden of being Queen off her shoulders.

Noticing she's distracted by her teddy bear, Seraphina asks Remi what the problem is. Remi, who is able to detect electrical circuits, finds a transmitter hidden inside the bear and Seraphina quickly realises that the Ability Gauge Vendor at Kovoro Mall was targeting high-tiers. After destroying the transmitter with her lightning, Remi warns Seraphina to be careful.

Meanwhile, Isen is puzzling over the information he has collected about John through a series of interviews (with Gavin, Lin, Crail, and a furious Doctor Darren) as it correlates with perfectly normal low-tier behaviour. However, he soon realises that it is completely contradictory to what he witnessed during John's fight. As John is walking to class, Isen intercepts him and takes him away to interrogate him under the guise of an interview for the school newspaper. 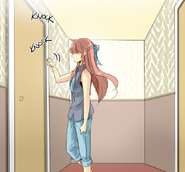 Remi outside Seraphina and Elaine's dormitory

Remi and Seraphina in Seraphina's room

Remi apologising for her absence 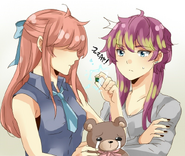 Isen thinking about everything he's learned about John

Isen taking John for interview
Add a photo to this gallery

Retrieved from "https://unordinary.fandom.com/wiki/Chapter_25?oldid=15868"
Community content is available under CC-BY-SA unless otherwise noted.