Keep your mouth shut this time.

This is the 24th episode of unOrdinary.

Arlo orders Isen to uncover all he can about the "cripple" John, as Arlo believes that the things he knows about John don't add up.

Later, John is walking through the corridor when he sees a superhero death betting pool hanging on the notice board. Angered by the flyer, he rips it from the wall in disgust.

Just as he is about to finish Krolik off, John has a flashback that makes him cease his assault and instead run off. Noticing John is running away, the bully shouts at him cockily. In the distance, Isen watches the fiasco curiously.

Remi, having come across the same death pool flyer, holds it with tears streaming down her face before burning it up, the last piece left showing the superhero name of her deceased brother: "X-Static". 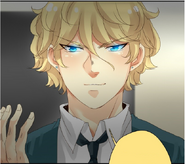 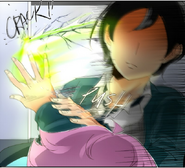 Retrieved from "https://unordinary.fandom.com/wiki/Chapter_24?oldid=7851"
Community content is available under CC-BY-SA unless otherwise noted.