I don't think I can give that book back to you

This is the 22nd episode of unORDINARY.

Elaine finds Unordinary in Seraphina's room and researches it on the Internet. Fearful that Seraphina will become a vigilante, she contacts Arlo for help.

At school, John meets Seraphina on the roof. He moans that the report cards are about to come out soon, but she advises him not to worry. However, she is soon the one worrying when John discovers Elaine found Unordinary. He scolds her for being careless, but she tells him not to worry, as she is Wellston's Ace.

John then asks Seraphina what she thinks about the book. He is a bit offended when she tells him she thinks the premise is absurd, but cheers up when she asks him to explain it to her and apologises for letting Elaine find it.

Seraphina realising Unordinary has been moved

Elaine researching Unordinary on the Internet 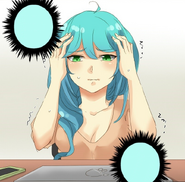 Elaine's reaction after finding out what Unordinary is 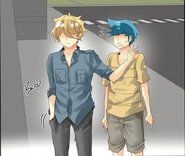 Arlo and his friend in casual weekend clothes 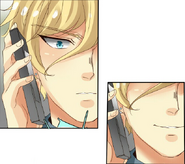 Arlo after learning that Seraphina has a copy of Unordinary 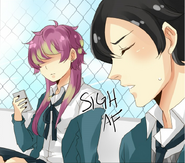 John sighing over the report cards 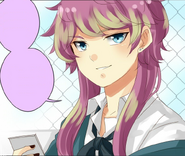 After all, I'm Wellston's Ace.

Seraphina asking John to explain Unordinary to her 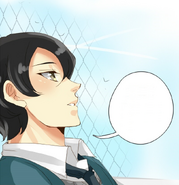 Retrieved from "https://unordinary.fandom.com/wiki/Chapter_22?oldid=20276"
Community content is available under CC-BY-SA unless otherwise noted.