Only the powerful are able to influence the outcome of something.

- Seraphina, on the similarities between Unordinary and the real world

This is the 21st episode of unORDINARY.

John, who has just finished a workout, gets a call from his father, W.H. Doe. His father, worried about his son's safety, warns him to be careful and keep his eyes open, especially due to the attacks by EMBER.

At her dormitory room, Seraphina is reading Unordinary. She turns to the first page, which bears a dedication to John from his father. Needing fresh air, she leaves the book on her bed and exits her room. She meets Elaine in the hallway, who offers her some juice made from fresh oranges sent from her.

Outside, Seraphina thinks about Unordinary. Despite the differences between the real world and the world of the book that she deems bizarre, she acknowledges one glaring similarity: only the powerful are able to influence both worlds.

Back in the dormitory, Elaine enters Seraphina's room to give her a glass of orange juice and leaves a note. However, she notices Unordinary, which Seraphina left out in the open. 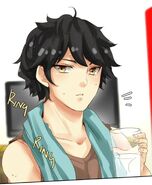 John after a workout 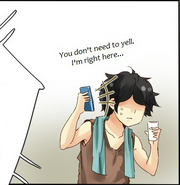 W.H. Doe yelling at John over the phone 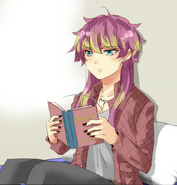 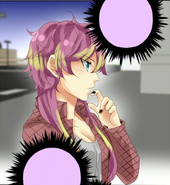 Elaine just put a glass of juice on Seraphina's desk 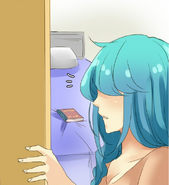 Elaine sees Unordinary
Add a photo to this gallery

Retrieved from "https://unordinary.fandom.com/wiki/Chapter_21?oldid=11577"
Community content is available under CC-BY-SA unless otherwise noted.