This is the 20th episode of unOrdinary.

Past Seraphina is contemplating John's fight with Lin and Crail the previous day when she is snapped out of her musings by her teacher calling her to come get her marks. The teacher remarks that Seraphina yet again achieved a perfect score and the class should follow her example, while the other students complain about how she's "on a different level" from them.

Upset by this, Seraphina thinks to herself about how her good grades and strength came from not just her birth gifts, but also her hard work and effort. Later on, she also overhears two girls gossiping about her last Turf Wars match and saying that Wellston had better be winning all of the Turf War matches with Seraphina on their roster.

At his locker, John overhears two figures (presumably Isen and Blyke) talking about how Triple Chocolate Cake is going to be served at the cafeteria that day. Miraculously, he actually manages to get a plate. However, he is stopped by Seraphina, who forces him to give her his slice. As he is about to hand it over, he outwits her by dropping it onto the floor.

Nearby students begin talking about her, whispering how she was outsmarted by a cripple, and how he disrespected her. Unable to take the gossip, judgement, and unfair opinions anymore, she snaps and beats up John viciously, finally knocking him to the floor and screaming at him and slapping him.

But once the other students have left, she breaks down into tears and cries, despairing over how she is still trapped by the rules and judgement of others despite her years of effort to be at the top.

Fast-forwarding back to the present, Seraphina walks down the stairs to the roof and spots the two girls who were talking about her at the start of her flashback gossiping about her yet again, this time about how she beat up Arlo at the previous day's Turf War and her rule-breaking spree. However, this time she simply smiles and walks away, knowing that although others will never stop judging her, she no longer cares about them and doesn't have to impress them anymore.

Other students are talking behind Seraphina's back

Seraphina threatening to use her ability on John

The slice of cake John dropped 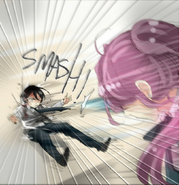 Seraphina smashing John into a wall 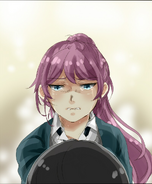 Seraphina breaks down into tears and cries

Present Seraphina
Add a photo to this gallery

Retrieved from "https://unordinary.fandom.com/wiki/Chapter_20?oldid=20422"
Community content is available under CC-BY-SA unless otherwise noted.