But when you're constantly perfect, it's no longer an accomplishment. Perfect becomes an expectation.

- Seraphina, on her life prior to meeting John

This is the 19th episode of unOrdinary

After John leaves, Arlo muses to Holden about John's strange behavior, pointing out how he didn't have the slightest hint of fear in his eyes, despite having just bumped into one of the most powerful people in the school. He ominously remarks that John is an "interesting guy".

Meanwhile, Seraphina is at her usual spot on the school roof playing a rhythm game. Seeing the perfect score she just achieved triggers a wave of memories.

She reminisces on her life. In the past, she always had to be perfect and before she knew it, perfection became the status quo. She laments on how she stopped living for herself and started living for others and their judgments of her.

However, she starts to think differently when she meets John for the first time. Lin and Crail, who have cornered him and are about to beat him up, are outwitted by him despite his lack of an ability. He talks directly to her, ignores their lecture on the hierarchy of Wellston, and finally manages to escape from them relatively unscathed.

Arlo and his friend 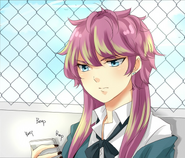 Seraphina on the roof

The other students judging Seraphina behind her back 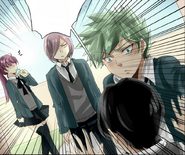 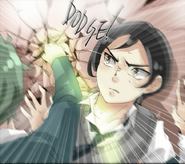 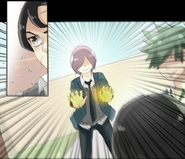 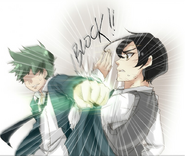 John about to grab Lin

Retrieved from "https://unordinary.fandom.com/wiki/Chapter_19?oldid=20417"
Community content is available under CC-BY-SA unless otherwise noted.