As Wellston's true Queen,
this is your responsibility!

This is the 13th episode of unOrdinary.

Seraphina returns from John's apartment with the copy of unOrdinary that John gave her. Upon her arrival, she finds Elaine, who's been worried sick about her total . She criticizes Seraphina for hanging out with John. She claims that she is making herself look bad by hanging out with a cripple. An annoyed Seraphina silences Elaine by freezing her in place with Time Manipulation. She reminds Elaine that what she decides to do with her time is none of her business. Seraphina goes into her room, and Elaine is free to move again. Shortly afterwards, Elaine's phone starts ringing. When she answers it, the caller asks her if Seraphina has returned yet. When she confirms it, the person on the other end immediately sets out for her dorm room.

Later Arlo comes to Seraphina's dorm to convince her to accompany him for a match at Turf Wars. At first, she declines, but she joins after hearing that Remi is unable to make it. The chapter ends with Seraphina (Ace), Arlo (King), Blyke (Jack) and, Elaine (Healer) on a train to the Turf Wars competition with Arlo smirking suspiciously. 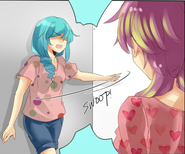 Elaine asking Seraphina where she was last night 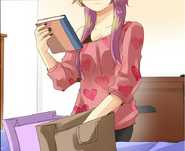 Seraphina with John's copy of Unordinary 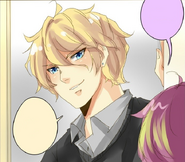 Team Wellston
Add a photo to this gallery

Retrieved from "https://unordinary.fandom.com/wiki/Chapter_13?oldid=22225"
Community content is available under CC-BY-SA unless otherwise noted.