To abduct a defenseless student... ...then to gather all these people around and torture her. Disgusting

This is the 129th episode of unOrdinary

The chapter starts off with Illena still trying to force Seraphina to something against her own will. Seraphina refuses to do it but Illena smashes her into the wall for refusing. Krolik tells Illena to stop before getting caught. Illena tells him off, saying how far they’ve gone and wont back out now. She tells the rest that Seraphina was getting what she deserved and Wenqi agrees with Illena saying that they wont ever get an opprtunity like this again. The mint hair girl admits that she only went bcause she wanted to take revenge on her for the wall incident but Illena argues back and says that this may be the one and only time to get back. As Illena keeps rambling more about how the high tiers treated them, Arlo and Elaine walk in.

Everyone in the room grows silent and stares at Arlo and Elaine in shock. Elaine takes a quick look around the room only to find Seraphina beaten up. Elaine quickly heals her while Arlo starts to question Illena and the others. As Arlo tell Illena off for abducting Seraphina, Illena trembles in fear trying to find the right words to say. Arlo tells Illena how kiddnapping Seraphina and torturing her was digusting and turns around, telling everyone that he would be reporting this incident to the Headmaster. Arlo adds that they crosed the line and should be ashamed and walks away. Illena, thinking to herself, thinks that she didn’t do anything to deserve this.

Illena loses her temper and without thinking starts to yell at Arlo saying how if it had been anyone else, nobody would’ve cared. Wenqi and Krolik hold Illena back to make sure she doesn’t attack him. Illena doesn’t care and starts screaming how high rangers get to do everything they want. But Arlo keeps on walking and ignores her. Illena breaks free and and attacks Arlo with a punch. Arlo activates his barrier leaving Illena hand covered in blood. She starts wailing while Arlo, Seraphina, and Elaine walk away.

Elaine worries about what had just happened but Arlo tells her that everything will be okay and to just ignore them. Arlo says that Seraphina is safe and thats all that matters. Elaine replies to him hesitantly but keeps on walking.

Back at the house, Crail explains to the group how he would never get accepted into a college because of what had just happened. Krolik comforts him and says it was already good enough to get accepted into a nice high school like Wellston. The mint hair girl is still angry and tells Illena that this was all her fault. Wenqi stands up for Illena and tells her this was all a team effort. Illena tells them there’s no use in fighting this out and walks toward the exit, only to find a mysterious student with a black mask and orange, glowing eyes. 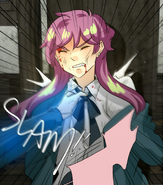 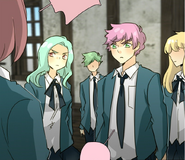 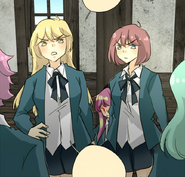 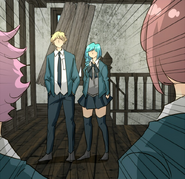 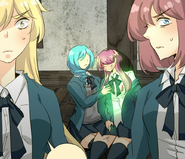 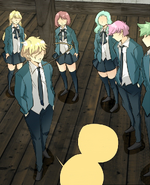 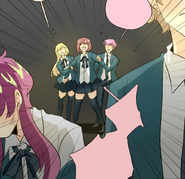 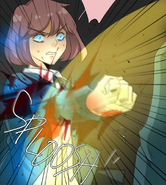 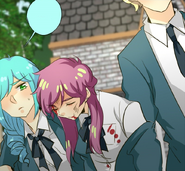 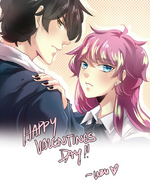 Retrieved from "https://unordinary.fandom.com/wiki/Chapter_129?oldid=25335"
Community content is available under CC-BY-SA unless otherwise noted.