Let me help you.

This is the 12th episode of unOrdinary.

In a mysterious room somewhere, two silhouettes discuss "Target 93", whose location they are tracking.

Meanwhile, John and Seraphina are asleep in his living room. Tortured by a nightmare of a traumatic childhood memory, John suddenly wakes up and leaves the house. When he returns, Seraphina notes that he is not talking as much as usual.

After John accidentally snaps at her, Seraphina leaves to go back to her dormitory. When she arrives, she is confronted by her worried roommate Elaine.

Mysterious people and their tracking screen 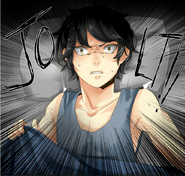 Seraphina reaches the dorms
Add a photo to this gallery

Retrieved from "https://unordinary.fandom.com/wiki/Chapter_12?oldid=7825"
Community content is available under CC-BY-SA unless otherwise noted.