How did you manage to get your hands on a copy of this?

This is the 11th episode of unOrdinary.

After their encounter with the invisible assailant, John convinces Seraphina to spend the night at his house for her own safety. While he is busy making ramen, she discovers his copy of the banned book Unordinary and realizes his father is the infamous writer W.H. Doe. 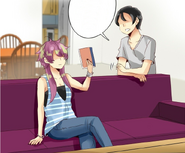 Retrieved from "https://unordinary.fandom.com/wiki/Chapter_11?oldid=20405"
Community content is available under CC-BY-SA unless otherwise noted.