Beginning in the middle of a boring trigonometry lesson, John silently complains about how the class sucks while narrating about his "ordinary" life. After asking to go to the bathroom, he is heckled by Mardin, who is hit in the face with a piece of chalk by the teacher for doing so, causing a bloody nose.

On the way to the bathroom, he comes across Blyke, who has been knocked through the wall by Isen, angering Blyke. They start fighting over Blyke breaking part of Isen's pen, heavily damaging the corridor in the process due to their incredibly destructive abilities. John, who claims to have been born without an ability, flees the scene in fear in order to find a different bathroom to use.

John getting bored in class 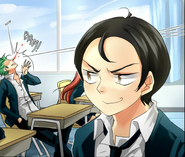 John on his way to bathroom.

Isen after Blyke broke his pen 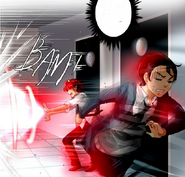 Blyke attacking Isen
Add a photo to this gallery

Retrieved from "https://unordinary.fandom.com/wiki/Chapter_1?oldid=26599"
Community content is available under CC-BY-SA unless otherwise noted.