This is a bonus filler episode of unOrdinary. Unlike regular episodes, this one consists of ten mini-stories mostly in a more simplistic chibi art style.

uru-chan introduces three of the main characters of unORDINARY: Seraphina, who is super cool, John, the only person in the entire school who wears the school vest, and Arlo, one of the series' antagonists.

uru-chan asks Seraphina to show her (and the readers) how to find new games, to which Seraphina directs her to the app store on her phone and searches for "Pigs".

Seraphina uses her ability to take an embarrassing photograph of John, who has been scared by the horror movie they are watching.

When Arlo asks Elaine to describe John for him, she says that he is "your typical loser" and even has an "L" on his forehead, referring to his trademark loose lock of hair.

Isen asks Blyke if he wants hot chocolate, then tells him to go make it himself when Blyke becomes touched.

Seraphina enviously compares her breasts to Rein's sizeably larger ones :( .

Doctor Darren is doing some work on his computer when a green-haired student falls through the roof with a bloodied forehead. Exasperated, he thinks to himself that he needs a new job.

John gels his hair and shows us how he creates his signature forehead curl (Reference to Story 4). Many fans ARE annoyed by the fact that John didn't want to stop gelling his hair. AND they even made a petition to stop him! (but no gel means bad John though..)

uru-chan hands John a huge list: the petition for him to stop gelling his hair. However, he outright refuses. 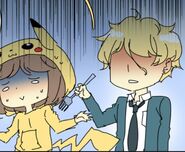 Arlo threatening Uru-chan with a fork

Seraphina is jealous of Rein for obvious reasons

Elaine explaining that John's lock of hair looks like an "L" 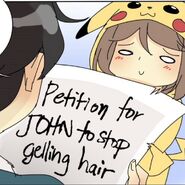 A petition for John to stop gelling his hair

Blyke is inspired by Son Goku from the Dragon Ball franchise.
Add a photo to this gallery

Retrieved from "https://unordinary.fandom.com/wiki/Bonus_Episode?oldid=26284"
Community content is available under CC-BY-SA unless otherwise noted.