This name/section/article is speculation by the wiki editors of UnOrdinary Wikia. Please do not take this as official information.

Abilities are a core element of the world of unORDINARY. Almost everyone is born with a supernatural ability, which ranges from destructive lasers and energy grenades to invisibility and mind reading. Abilities feature heavily in the fights between characters. When somebody is born without an ability, they are called a cripple.

All abilities in unORDINARY are primarily active, meaning they require a conscious decision to be activated. While abilities often vary from person to person, regardless of what ability one has, a user's eyes will glow when an ability is activated. Once activated, all abilities give out an aura that is usually in the user’s signature colour. A signature colour refers to the user's eye colour or hair colour.[1] In abilities that involve enhancing a body part, the corrpesonding body part will be surrounded by the user's aura. In abilities that involve generating a construct, such as Projectile Generation abilities or Construct Generation abilities, the constructs made will possess the user's eye color, hair color, or both.

There have been some exceptions to the ability colour rule mentioned above, for example, when Wenqi's ability, Speed was first introduced, the colour of her aura was red as opposed to her signature colour, yellow. Most element-based abilities, such as Lightning, Heat Palm, and Fire Claws will have auras that are coloured like the element it is associated with (electric-blue for lightning bolts, red for heat, and orange for fire respectively).

Whenever an ability is used, it usually gives of an Aura in a user's hair or eye colour. A person's Aura flows through Aura Channels which regulates the flow of aura throughout the body. Normally, the aura flow through these channels are self-regulated and cannot be altered, however, there are abilities that allow the user to naturally alter their aura flow.[2]

Although most low-tiers and mid-tiers only have a single method of using their ability, elite-tiers and high-tiers, especially Turf War participants, have honed multiple techniques from their ability. Arlo's Barrier, for example, is not only defensive, but can also deflect physical damage and allow only certain people to enter or exit. An even better example is Blyke's Energy Beam; when attacking, he can use a single powerful, long-range shot or multiple, smaller, throw-able spheres. When defending, his beams can propel him across a wide area, greatly increasing his speed, or deflect other ranged attacks. Blyke can also use a big pulse to either warn others or to protect himself.

For high-tiers, their mastery of their ability also causes it to manifest passively. Three examples of this can be found in Remi's electrical current detection, Arlo's invulnerability, and John's aura detection.

While most abilities manifest within a person at a young age, there are others who develop their abilities much later than others; these individuals are called late-bloomers. Once an ability manifests, the user must train and practice to discover new ways to utilize their ability.[3] Abilities can also undergo name-changes to better describe their effects, as shown when Blyke's Energy Beam renamed Energy Discharge in Chapter 199.

Currently, it is unknown if powerless people have latent abilities or can gain abilities through artificial means, however, there are ways to remove, suppress and enhance abilities artificially. Though there are theories of returning abilities that have been removed.

According to Uru-chan's stat sheets, there are five main traits every ability has: Defense, Power, Speed, Recovery, and Trick. Every stat is rated from a scale of 1-10 with 1 being the lowest possible number and 10 being the highest. Even those who have the same ability, like Remi and Rei, could have completely different stats depending on how they use their ability.

Power is the raw offensive strength of an ability; in other words, how much it hurts when it hits. Abilities like Lightning and Super Strength have high power.

Defense is, as the name suggests, how well an ability can counter attacks and protect its user from harm. Abilities like Barrier and Stone Skin have high defense.

Speed is how quickly the ability allows its user to move. Abilities like Speed and Time Manipulation have high speed.

Recovery is a stat that determines how well an ability can aid in recovering during or after battles; the recovery stat encompasses all forms of recovery such as healing, snapping out of stuns, regaining energy, and so on. Abilities like Healing and Regeneration have high recovery.[4]

Trick is a trait that shows how well a user can utilize their ability to surprise or outplay their opponent; this stat depends on the user's ingenuity and creativity. Abilities like Aura Manipulation and Nightmare have high trick.

Alana after having her Fortify enhanced.

Joker after copying Phase Shift with both his forms' stats displayed.

Joker after copying Catch Up and Clobber. 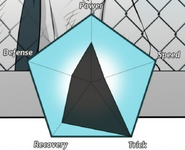 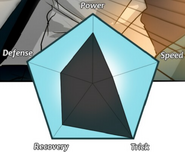 Waldo after having his Shockwave enhanced.

Zeke, with both his forms' stats displayed.

Uru-chan
Add a photo to this gallery

For ease of reading, this wiki classifies abilities into one of seven unofficial categories.

Augmentation Abilities are abilities that alter a physical aspect of a user in some way whether it be boosting their stats, transforming parts of their body into a different material, manipulating one's body parts, or even rendering themselves invisible.

Construct Generation Abilities are abilities that allow its user to create physical objects from their ability. Such abilities include the defensive Barrier and the versatile Energy Ropes.

As their name implies, Medical Abilities grant users a way of healing themselves or others in some manner. Abilities under this category include Healing and Regeneration.

While many abilities grants physical boosts, Mental Abilities specialize in affecting the user's mind or the mind of another. Some mental abilities allow users to detect lies, enter other minds and even see glimpses of the immediate future.

Some abilities in unORDINARY, despite having a different name, may have similar effects when compared with other abilities. Uru-chan has stated that she uses different words for similar abilities. Some of these "Similar Abilities" include Catch Up and Speed or Impact and Strength.

Retrieved from "https://unordinary.fandom.com/wiki/Ability?oldid=28487"
Community content is available under CC-BY-SA unless otherwise noted.